Expectation-maximization (EM) is a popular algorithm for performing maximum-likelihood estimation of the parameters in a latent variable model. In this post, I discuss the theory behind, and intuition into this algorithm.

Expectation-maximization (EM) is a popular algorithm for performing maximum-likelihood estimation of the parameters in a latent variable model. Introductory machine learning courses often teach the variants of EM used for estimating parameters in important models such as Guassian Mixture Models and Hidden Markov Models. EM also features heavily in bioinformatics where, for example, it is used for quantifying gene expression from RNA-sequencing data and for finding sequence-motifs in genomes.

After learning about this algorithm in introductory graduate school courses, the intuition was clear, but I still had several remaining questions. When is EM preferred over some other method for estimating parameters? What is EM really doing? Why is EM guaranteed to converge?

In this blog post, I’ll describe my current understanding of the theory behind the EM algorithm, which helped me to answer the aformentioned questions. I’ll also offer a few perspectives for intuiting this algorithm.

As mentioned previously, EM is used for performing maximum likelihood estimation on the parameters of a latent variable model. To review this task, let’s say we have two sets of random variables $X$ and $Z$ and some parameterized joint distribution over these random variables:

where $p$ is the probability mass/density function, $x$ and $z$ are values for $X$ and $Z$, and $\theta$ parameterizes the distribution.

In practice, maximizing this function over θ may be difficult to do analytically due to this integral. For such situations, the EM algorithm may provide a method for computing a local maximum of this function with respect to θ.

This alternation between formulating a Q-function and maximizing that Q-function are repeated until the estimate of $\theta$ converges. As we will prove later, not only is this process guaranteed to converge, but it will converge to a local maximum of $l(\theta)$.

Moe specifically, the E-Step and M-Step work as follows:

The “core” of formulating an EM algorithm for a particular model is calculating $p(z \mid x ; \theta_t)$. If the model admits an easy calculation of this function, then the EM algorithm may be a good a choice!

Assign $\theta_{t+1}$ to be the value that maximizes the Q-function that was formulated on the previous E-step:

We repeat the E-Step and M-Step until the difference between $\theta_t$ and $\theta_{t+1}$ is small, indicating convergence. We also note that $\theta_0$ can be set to an arbitrary value – usually set randomly. Since EM finds a local maximum of $l(\theta)$, it is often wise to try many different $\theta_{0}$’s!

EM is coordinate ascent on the evidence lower bound

Now, let’s dig into what the EM algorithm is really doing. Specifically, we will show that EM is a coordinate ascent algorithm on a quantity called the evidence lower bound (ELBO).

Coordinate ascent? ELBO? Before talking about EM, let’s first dig into the these concepts:

Coordinate ascent is a relatively simple and iterative strategy for maximizing a function. Given a function $f(a, b)$ that takes two arguments $a$ and $b$, the idea of coordinate ascent is that we will iteratively fix $a$ to some value $\hat{a}$ and then choose for $b$ the value $\hat{b}$ that maximizes $f(\hat{a}, b)$ . Given $\hat{b}$, we then re-assign to $a$ the value that maximizes $f(a, \hat{b})$. This procedure is repeated until convergence.

In our setting, we don’t yet know which value to use for $\theta$, nor do we know the distribution $q$ for $Z$. Thus, the ELBO becomes a function of both $q$ and $\theta$:

The last line in the above derivation is simply maximzing the Q-function – exactly the M-Step!

To build up a visual depiction of how the EM algorithm works, we’ll first lay out some relationships between $F$ and $l$:

First, though not proven here, at iteration $t$, the function $F$ touches the likelihood function $l$ at precisely $\theta_t$. That is,

These properties are depicted below: 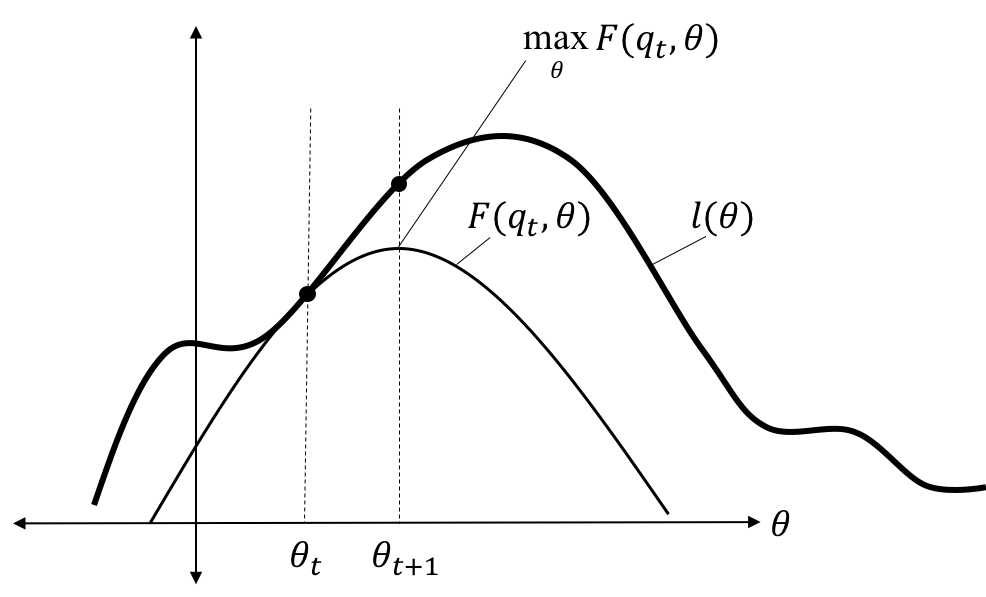 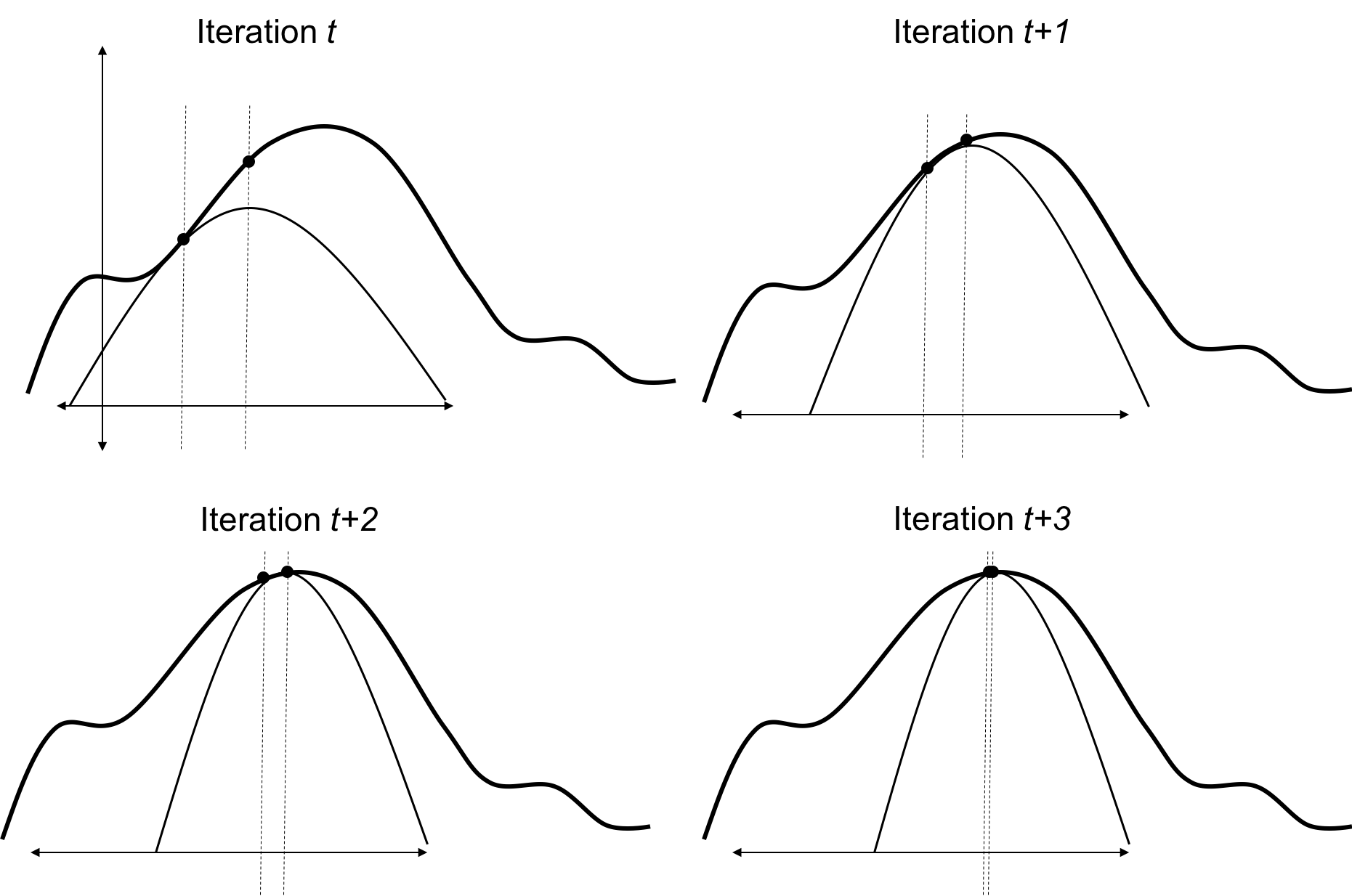 When to use the EM algorithm

The EM algorithm is just one choice of many for tackling the optimization problem:

When would EM be preferred over other optimization algorithms out there?

First, the EM algorithm might be a good choice when $l(\theta)$ is challenging to optimize, but the Q-function is easier. The likelihood function is often difficult to optimize due to the presence of the log of an integral:

Taking the derivative/gradient of this function with respect to $\theta$, setting it to zero, and then solving for $\theta$ is often very difficult to do analytically.

On the otherhand, if the integral and logarithm were flipped, then function might be much easier to optimize analytically. The Q-function is just such a function:

Thus, we see that EM converts a difficult optimiziation problem into a series of easier optimization problems where each sub-problem is made easier by flipping the integral and log within the objective function!

Intuition behind the Q-function: a generalization of the likelihood function

where $\mathcal{Z}$ is the support of $Z$’s probability mass function and $\mathbb{I}(z=z’)$ is an indicator function that equals one when $z’ = z$ and equals zero otherwise.

We note that the difference between these two functions is that the indicator variable in the complete data likelihood $\mathbb{I}(z=z’)$ is replaced by the probability $p(z \mid x ;\theta)$. This leads us to viewing the Q-function as a sort of generalization of the complete data likelihood. That is, $p(z \mid x ; \theta)$ acts as a weight for its corresponding term in the summation, and measures our current certainty that the hidden data is equal to $z′$. When we know $Z = z$, all of the weight is assigned to the term in which $z′ = z$ and no weight is assigned to the terms in which $z′ \neq z$ – that is, $p(z \mid x ;\theta)$ reduces to the indicator function.

Intuition behind the Q-function: a likelihood function over a hypothetical dataset

That is, let us assume that we generate a very large set of values for $Z$ drawn i.i.d. from the distribution specified by $p(z \mid x ; \theta_t)$:

Now we will show that maximizing the Q-function is equivalent to maximizing this likelihood function over the hypothetical data. Let

Now let $c(z)$ be the cardinality of

Finally we can formulate our maximum likelihood problem on this hypothetical data:

The final line in the above calculation is the Q-function!

In this light, we can view the EM algorithm as an iterative process, in which we posit a distribution over the hidden data $p(z \mid x ; \theta_t)$, then generate a hypothetical data set on which we perform maximum likelihood estimation. This new estimate of the parameters, as estimated from the hypothetical dataset, is then used in the next iteration to generate another data set. This process is repeated until the estimates of the parameters converge.