In this series of posts, I present my understanding of some basic concepts in measure theory — the mathematical study of objects with “size”— that have enabled me to gain a deeper understanding into the foundations of probability theory.

In introductory courses, it is taught that the expectation for a discrete random variable is given by

whereas if $X$ is continuous its expectation is given by

Both of these definitions carry the same intuition – that is, to compute the expectation of $X$ we take a weighted-average of all of the values of the random variable where the weights correspond to how likely each value is. Can we unify these two definitions using our new measure-theoretic definition for a random variable?

This may look pretty strange – nothing like the Reimann integral that is usually taught in introductory calculus classes. Let’s dig in.

For a given function $f$ whose domain and codomain are both numeric, an integral measures the area under the function’s surface.

When $f$ is smooth (i.e. both continuous and differentiable), we can approximate the area under $f$ within a given interval $(a,b)$ by summing the areas of rectangles of even width that span $(a,b)$. If we keep shrinking the rectangles then, in the limit, this becomes the Reimann integral, which is taught in advanced high school and introductory undergraduate calculus courses. The figure below demonstrates this process:

The Lebesgue integral also forms rectangles, but it does so in a different way than the Reimann integral. For the Lebesgue integral, a rectangle is formed for each value in the function’s codomain (i.e., each unique height that the function ever reaches). For each value, a recangle is formed with a height equal to this value and a width equal to the length of all intervals along $\mathbb{R}$ where the function reaches this height. The figure below displays this alternate stratagy:

Defining the Lebesgue integral through a sequence of definitions

I find the full, rigorous definition of the Lebesgue integral to be quite complex. It helped me to break this definition down into a sequence of simpler definitions, each building on the next:

A simple function is a measure-theoretic generalization of a step-function. Given a measurable space $(F, \mathcal{F})$, a simple function $g$ is any function that can be expressed as a finite, linear combination of indicator functions on sets in $\mathcal{F}$:

where $\mathbb{I}_{A_i}(x)$ is an indicator function that equals one if $x \in A_i$ and equals zero otherwise. 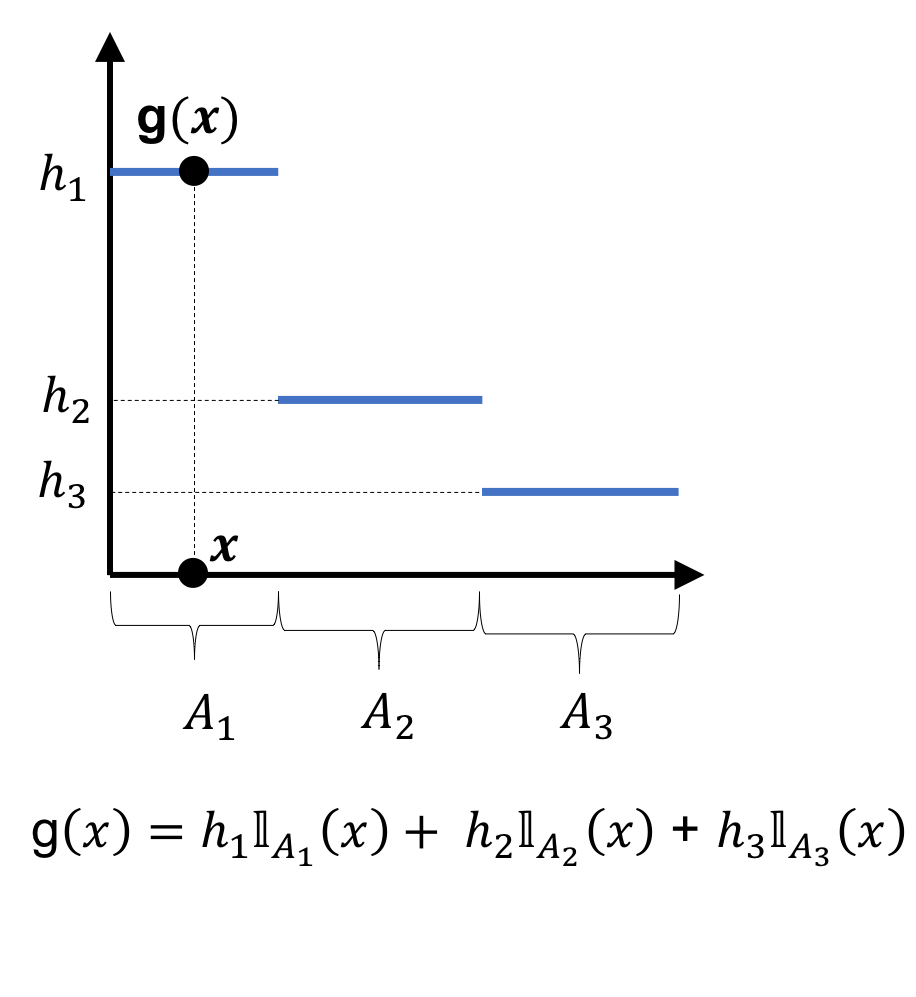 Simple functions generalize step functions because the domain need not be numeric – rather, it simply must have a $\sigma$-algebra defined for it.

As we’ll soon see, simple-functions are the basis on which the Lebesgue integral will be constructed. simple functions are used to generalize the rectangles used in the definition of the Reimann integral!

2. The Lebesgue integral of a measurable simple function

for some integer $n$, where

Let’s parse this definition. First, notice we are considering a measurable simple function $g$ – that is, the codomain of $g$, $H$, has a $\sigma$-algebra, $\mathcal{H}$ defined for it. This $\sigma$-algebra is somewhat trivial since, $H$ is finite and countable (by the definition of a simple function) and each element of $H$ gets its own singleton-set in $\mathcal{H}$. The pre-image of each of these singleton-set ${h_i}$, $A_i$, has a measure $\mu(A_i)$.

Notably, if $H$ is the real numbers $\mathbb{R}$ (in which case each $A_i$ would be an interval of numbers) and $\mu(A_i)$ is equal to the length of the interval containing $A_i$, then the Lebesgue integral for the simple function can be interpreted as computing the sums of areas of rectangles! See the figure below for this depiction:

3. The Lebesgue integral of a measurable positive function

Definition 10: Given a measure space $(F, \mathcal{F}, \mu)$ and measurable space $(H, \mathcal{H})$ where $H \subseteq \mathbb{R}$ and a positive measurable function $f : F \rightarrow H$, the Lebesgue integral of this positive function is defined as

Okay this is bit dense so let’s break it down. First, we notice that this definition uses a supremum over a set. Before examining the supremum, let’s just take a look at the set itself:

At last we come to finally defining the Lebesgue integral. If you have followed along so far, then this last step is relatively easy. Given that we have a definition for a Lebesgue integral over positive measurable functions, it’s not too difficult to concoct a definition for functions that can be negative too – we simply need to consider the positive and negative parts of the function separately: 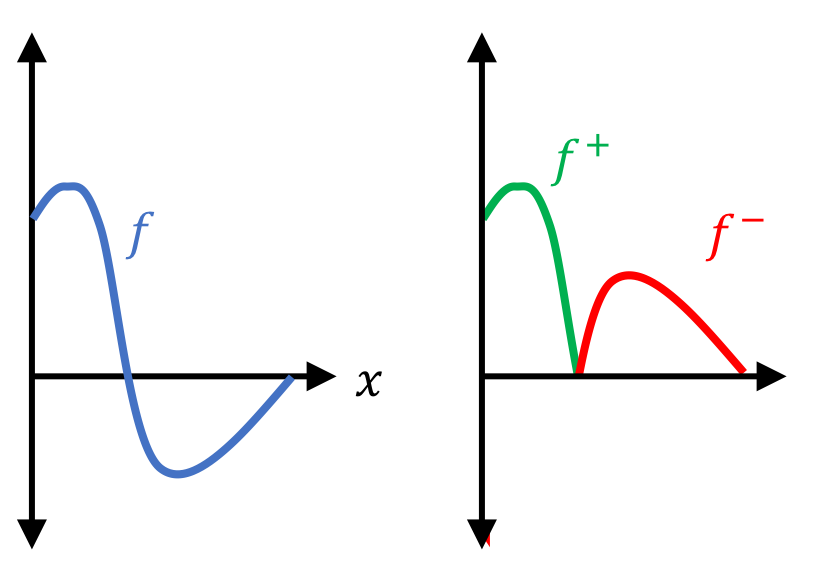 Finally, coming back to probability theory, the expectation of a random variable $X$ is the Lebesgue integral of $X$ over the sample space $\Omega$ with respect to the probability measure $P$:

When $X$ is discrete, the Lebesgue integral becomes the familiar

This follows from $X$ already being a simple-function from $\Omega$ to the interval $[0,1]$ (the supremum is also the maximum in the definition for the Lebesgue integral)! Though not proven here, when $X$ is continuous with density function $f$, the expectation reduces to the familiar