Matrices are a fundamental concept in linear algebra and are ubiqutous across science and engineering. On their surface, a matrix is simply a two-dimensional array of values. For example, the following is a matrix:

As I discuss in my previous blog post some concepts require viewing at multiple angles to grasp their true nature. Despite their surface-level simplicity, I think matrices are one of those concepts and I believe it would have helped me as a sophomore in my college linear algebra course if a high-level, multi-perspective overview of matrices was provided at the outset in order to provide context for future study in linear algebra. In this post, I will introduce the three main angles from which to view matrices that would have helped my former self.

Before looking at the three angles of viewing matrices, I will introduce some notation. First, a matrix is a rectangular array of values. For example, the following matrix \(\boldsymbol{A}\) has \(m\) rows and \(n\) columns:

If we orient \(\boldsymbol{x}\) vertically, we form a matrix called a column vector:

Here’s an overview of notation for discussing matrices:

There are three main angles to view matrices. Going from least abstract to most abstract, these angles are as follows:

In real world use, some matrices need only be interpreted through one of the aforementioned lenses; however, in some cases a matrix must be viewed through all three. Thus, using matrices in practice often requires mentally switching between all three of these ways of viewing/interpreting a single matrix. That is, in one context, it is most helpful to view the matrix as a collection of vectors, but then in another context, it is more helpful to view the matrix as a function.

In the following sections I will provide more depth to these three angles.

A matrix as a table of data

The most simple interpretation of a matrix is as a two-dimensional array of values. Here are a few examples: 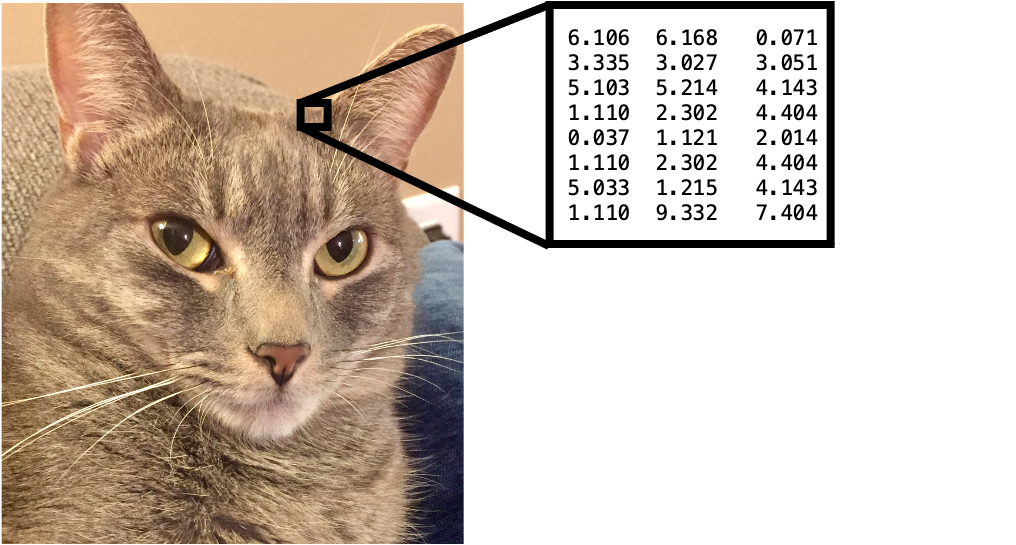 A matrix as a collection of vectors

Thus, a matrix can be thought about as a list of row vectors:

For example, the following matrix

can be thought of as two three-dimensional row vectors (The dotted lines are visualize guides. The colored dashed lines trace each vector to the \(z = 0\) plane. The black dashed lines depict the difference between the two vectors on the \(z=0\) plane.):

Or, as three two-dimensional column vectors:

A matrix as a function between vector spaces

The most abstract, and arguably the most important view of a matrix is as a function that maps vectors in one vectors space to vectors in another vector space. In order to use a matrix as a function, we first define an operation between a matrix and a vector called matrix-vector multiplication where we multiply a vector by a matrix to produce a new vector:

We will not go into details in this post regarding how matrix-vector multiplication is defined, but the important take away is that, once defined, we can view a matrix as a function on a vector. That is, given matrix \(\boldsymbol{A}\), we can form a function

This is depicted in the schematic below: