An extremely important concept in the study of vector spaces is that of linear independence. At a high level, a set of vectors are said to be linearly independent if you cannot form any vector in the set using any combination of the other vectors in the set. If a set of vectors does not have this quality – that is, a vector in the set can be formed from some combination of others – then the set is said to be linearly dependent.

In this post, we will present a more foundatioanl concept, the span of a set of vectors, and then move on to the definition for linear independence. Finally, we will discuss a high-level intuition for why the concept of linearly independence is so important.

Given a set of vectors, the span of the set of vectors are all of the vectors that can be “constructed” by taking linear combinations of vectors in that set. More rigorously,

Intuitively, you can think of $S$ as a set of “building blocks” and the $\text{Span}(S)$ as the set of all vectors that can be “constructed” from the building blocks in $S$. To illustrate this point, we show in the figure below two vectors, $\boldsymbol{x}_1$ and $\boldsymbol{x}_2$ (left), and two examples of vectors in their span (right): 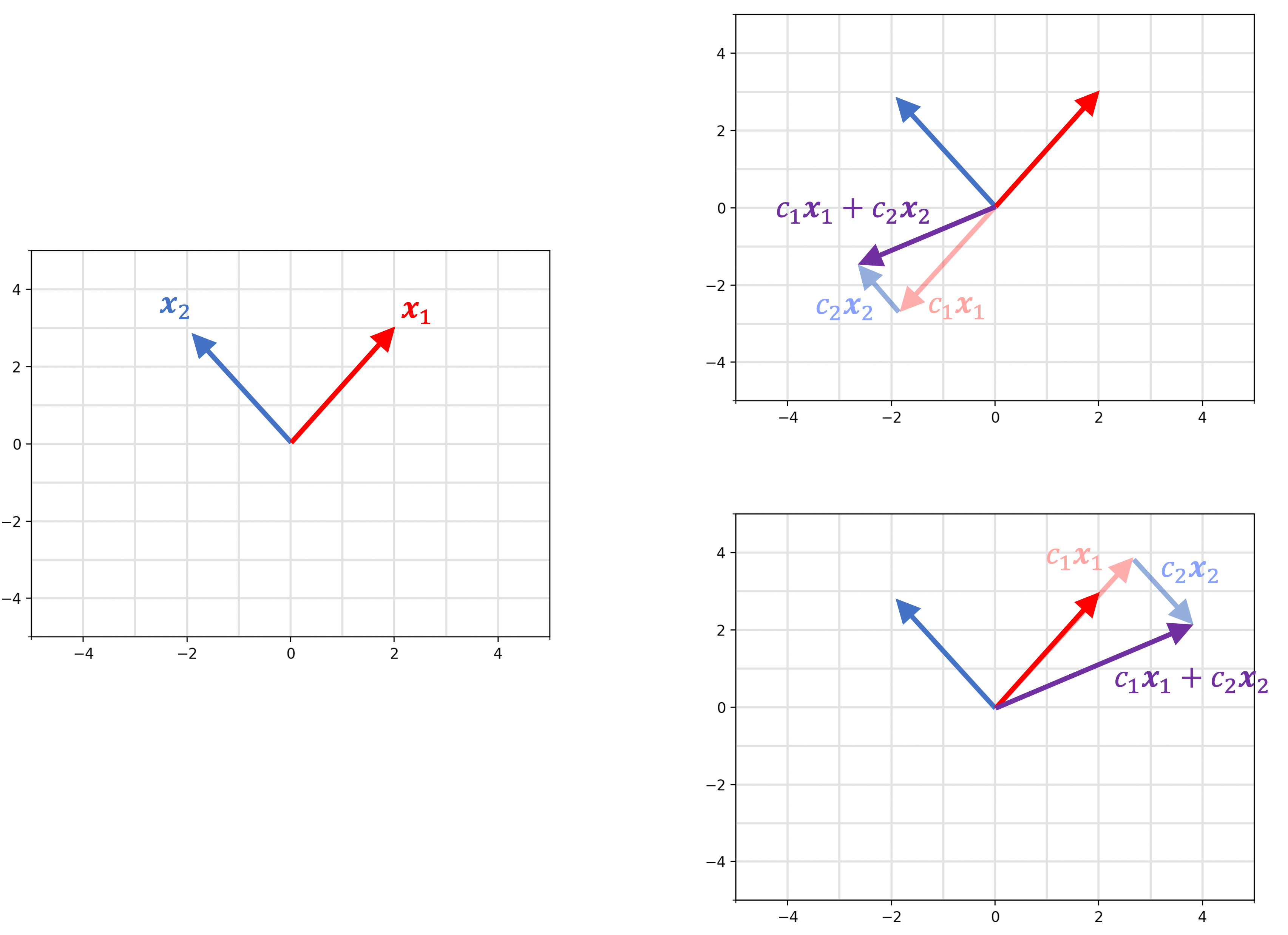 Note, we can see that in this example that we could construct ANY two dimensional vector from $\boldsymbol{x}_1$ and $\boldsymbol{x_2}$. Thus, the span of these two vectors is all of $\mathbb{R}^2$! This is not always the case. In the figure below, we show an example with a different span: 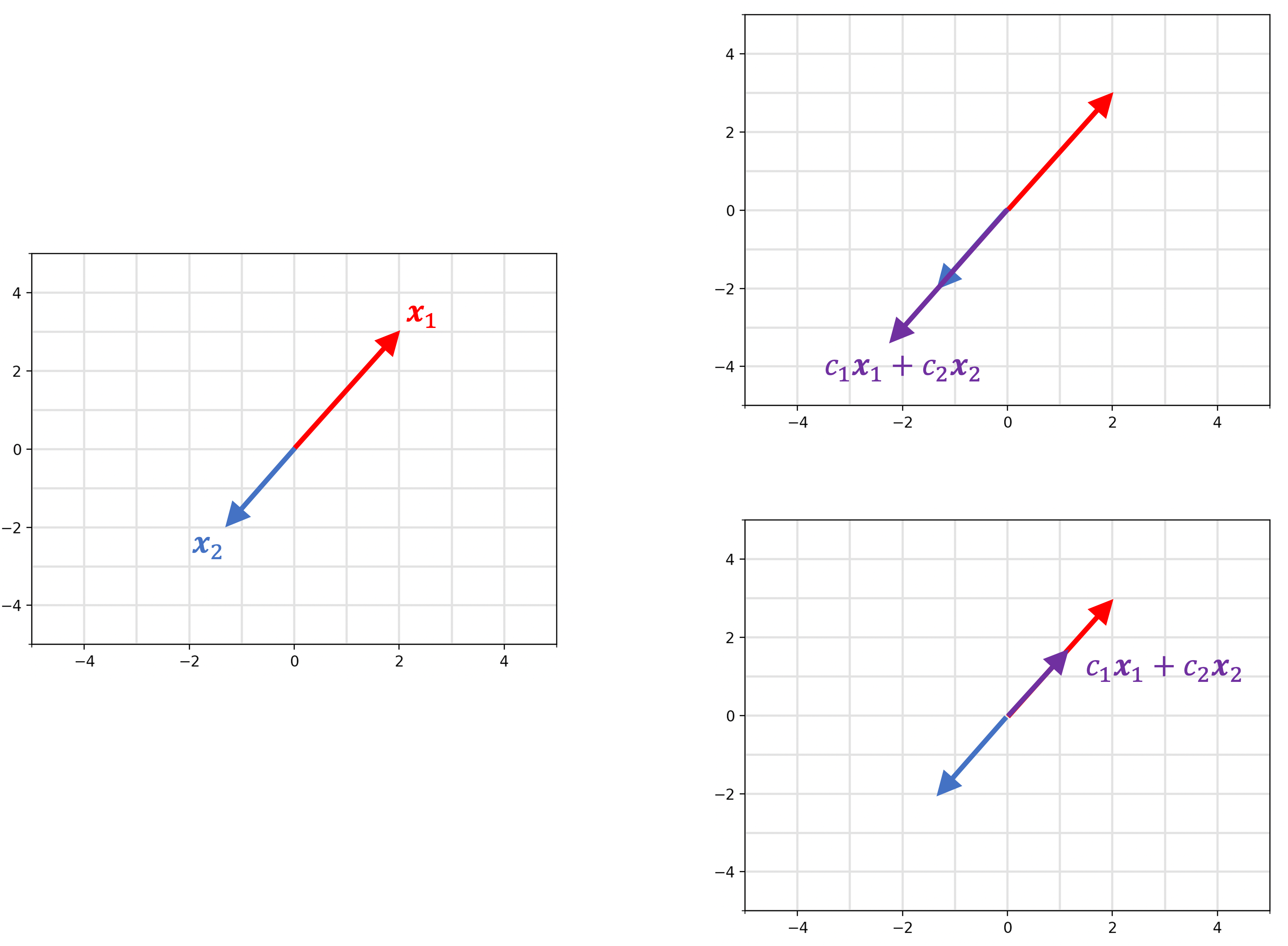 Why is the set on the right linearly dependent? As you can see below, we can use any of the two vectors to construct the third: 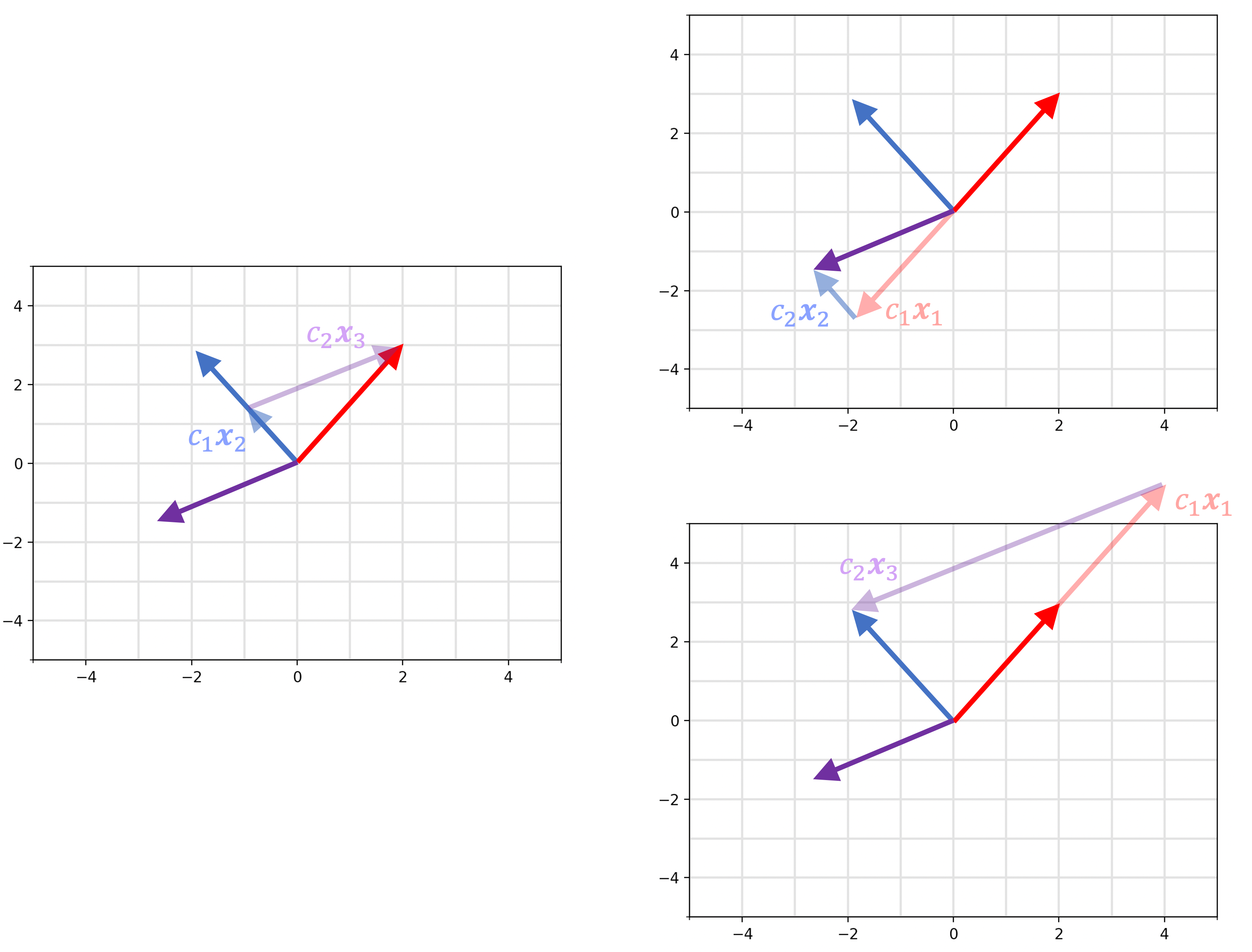 At a more geometric level of thinking, a set of $n$ linearly independent vectors $S := { \boldsymbol{x}_1, \dots, \boldsymbol{x}_n }$ spans a space with an intrinsic dimensionality of $n$ because in order to specify any vector $\boldsymbol{v}$ in the span of these vectors, one must specify the coefficients $c_1, \dots, c_n$ to construct $\boldsymbol{v}$ from the vectors in $S$. That is,

When first introduced to Euclidean vectors, one is taught that the length of the vector’s arrow is called the norm of the vector. In this post, we present the more rigorous and abstract definition of a norm and show how it generalizes the notion of “length” to non-Euclidean vector spaces. We also discuss how the norm induces a metric function on pairs of vectors so that one can discuss distances between vectors.