At the heart of of a number of important machine learning algorithms, such as spectral clustering, lies a matrix called the graph Laplacian. In this post, I’ll walk through the intuition behind the graph Laplacian and describe how it represents the discrete analogue to the Laplacian operator on continuous multivariate functions.

At the heart of the field of spectral graph theory as well as a number of important machine learning algorithms, such as spectral clustering, lies a matrix called the graph Laplacian. (In fact, the first step in spectral clustering is to compute the Laplacian matrix of the data’s k-nearest neighbors graph… perhaps to be discussed in some future blog post.)

the Laplacian matrix is defined as

This definition is super simple, but it describes something quite deep: it’s the discrete analogue to the Laplacian operator on multivariate continuous functions. How does such a simple definition capture such a complex idea? We will demonstrate this in the remainder of this post.

Review of the Laplacian for continuous, multivariate functions

the Laplacian of \(f\) is defined as

One important point to keep in mind is that the gradient is an operator that takes as input a multivariate function and produces a vector field.

Finally, we come back to the Laplacian. Given a continuous, multivariate function \(f\), the Laplacian is simply the divergence of \(f\)’s gradient:

Intuitively, what does the Laplacian describe? Well, following our understanding that \(f\)’s gradient provides vectors that point in \(f\)’s direction of steepest ascent with magnitude proportional to its steepness, we see that the “flow” at any point in this vector field will correspond to how much the steepness of \(f\) is changing. If at some point, \(\boldsymbol{x}\), the steepness is not changing – that is, \(\boldsymbol{x}\) is located at a steady incline or a steady decline – then the divergence of the gradient at \(\boldsymbol{x}\) will be zero. That is, the Laplacian will be zero. On the other hand, if at \(\boldsymbol{x}\), the steepness is shrinking or growing – for example, because we’re close to a local maximum/minimum – then the divergence (i.e. Laplacian) will be either large or small (large if we’re approaching a minimum and small if we’re approaching a maximum).

Said succintly, the Laplacian tells us how much the steepness is changing. It’s the analogue to the second derivative for a continuous, single-variate function!

We will save a rigorous definition for the gradient, divergence, and laplacian for another blog post. In the meantime, this high-level intuition will hopefully be sufficient for understanding the core ideas behind the graph Laplacian.

Constructing a Laplacian for graphs

The Laplacian matrix \(L\) for a graph \(G := (V, E)\) captures the same idea as the Laplacian for continuous, multivariate functions. To see how this is, we will need to construct all of the analogous components for graphs that are required to construct the Laplacian for continuous, multivariate functions. Specifically, we need to define graph analogs for points, functions, gradients, and divergences. For the remainder of this blog post, we’ll use the following graph as an illustration:

This one is easy. Each vertex \(v \in V\) in our graph will be analogous to a point in a Euclidean space.

We can define a function on the graph \(f\) as simply a mapping from each vertex/point to a real number:

For example, in our example graph, such a function can be visualized as follows: 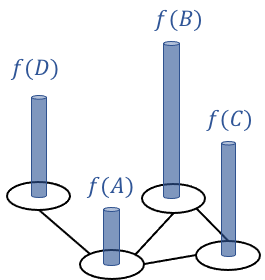 Intuitively, the gradient of a function tells us how much and in what direction a function is changing at each point. The analog for a graph is simply the set of edges between the vertices. The “magnitude” of a gradient vector then simply corresponds to the difference in the functions values between the two vertices. That is, for edge \(e_k = (v_i, v_j) \in E\) connecting node \(v_i\) to node \(v_j\) (where \(i < j\) in the vertices’ ordering) its “gradient” can be taken to be

These “edge gradients” are depicted below:

Note, the ordering of vertices tells us which vertex’s function value is subtracted from the other. For the purpose of constructing the Laplacian matrix, this order is arbitrary. Now, if we order all of the edges in the graph similarly to how we ordered all of the vertices, then we can represent the gradient as a vector:

Given our example graph, the incidence matrix would be as follows:

Then, given a graph function \(\boldsymbol{g}\), we compute the “gradient” as

What matrix will perform this summation? Precisely the transpose of the incidence matrix \(K^T\)!

If we inspect \(K^TK\) more closely, we can show that this matrix is exactly the diagonal matrix minus the adjacency matrix that we introduced at the beginning of this post!

Because the \(i\)th column of \(K\) represents the “edge indicators” of all edges adjacent to \(v_i\), we see that the dot product filters out all edges that are not adjacent to both \(v_i\) and \(v_j\). Thus, if \(v_i\) is adjacent to \(v_j\) there will be only one non-zero term in the dot product’s summation corresponding to the one edge that connects them! This term is simply \(-1\). Why is it always negative? By design of the incidence matrix each row has one value of -1 and one value of 1. When multiplied together, this results in -1.

And there you have it. The Laplacian matrix as the graph analogue to the Laplacian operator on multi-variate, continuous functions!