So far, we have discussed how, intuitively, according to Information Theory, “information” can be interpreted as the amount of surprise experienced when we learn the outcome of some random process. Information Theory expresses this “surprise” by counting the minimum number of symbols that would be required to communicate the outcome of this random process to another person/agent.

This idea of measuring “surprise” by some number of “symbols” is made concrete by Shannon’s Source Coding Theorem. Shannon’s Source Coding Theorem tells us that if we wish to communicate samples drawn from some distribution, then on average, we will require at least as many symbols as the entropy of that distribution to unambiguously communicate those samples. Said differently, the theorem tells us that the entropy provides a lower bound on how much we can compress our description of the samples from the distribution before we inevitably lose information (“information” used here in the colloquial sense).

In this post, we will walk through Shannon’s theorem. My understanding of this material came, in part, from watching this excellent series of videos by mathematicalmonk on YouTube. This post attempts to distill much of the information presented in these videos in my own words, keeping only the parts of the explanation necessary to get through the theorem.

Encoding and communicating samples from a distribution

This framework is depicted below: 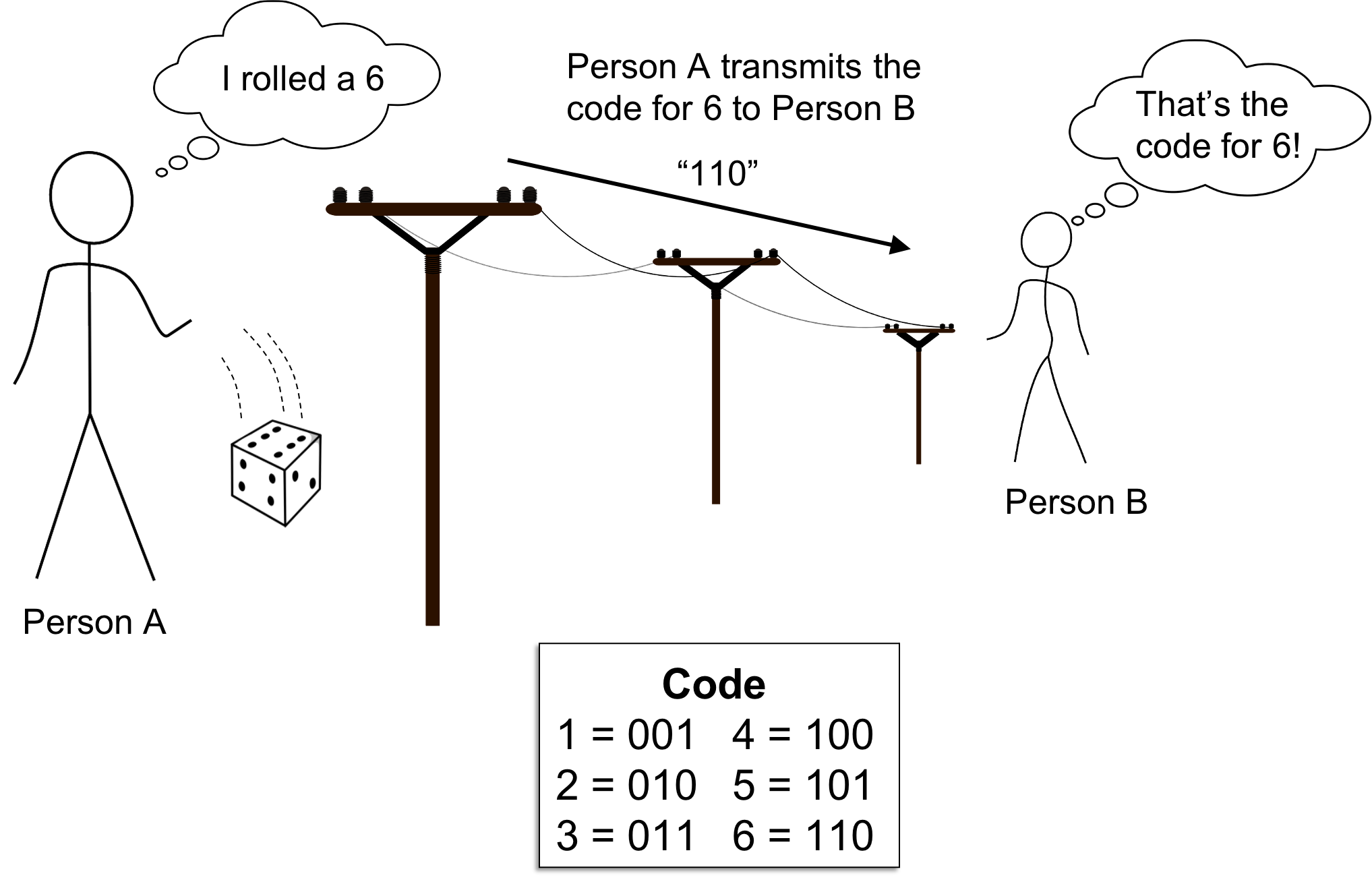 Let us rigorously describe the mathematical framework in which Person A is communicating messages to Person B. To do so, we will introduce a bunch of fundamental concepts from Coding Theory.

The idea of each \(X_i\) being a “symbol”, intuitively implies that the number of outcomes that each \(X_i\) can take on is finite. To make this concrete, we will assert that \(X\) is a categorical distribution. That is,

where \(\mathcal{X}\) is a finite set of symbols called the source alphabet and \(\boldsymbol{\theta}\) is a vector describing the probabilities that a given \(X_i\) will take on a given symbol in \(\mathcal{X}\).

Before communicating each source symbol $X_i$ to Person B, Person A will first encode each symbol using a code function \(C\). The code function \(C\) takes as input a source symbol and outputs a sequence of symbols from a new set of symbols called the code alphabet, denoted \(\mathcal{A}\). The code is called a \(b\)-ary code if the size of the code alphabet is \(b\). That is, if \(\vert\mathcal{A}\vert = b\). For example, if \(\mathcal{A}\) consists of two symbols, we call the code 2-ary (a.k.a. binary). 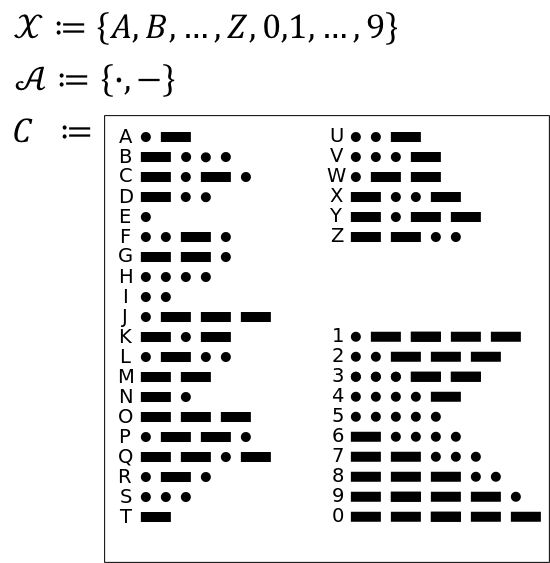 For example, the name “Morse” would be encoded as follows: 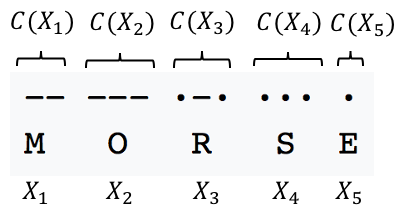 Stated more rigorously, if we denote \(\mathcal{A}^*\) to be the set of sequences of code symbols

Given some categorical distribution \(X\), Shannon’s Source Code Theorem tells us that no matter what \(C\) you choose, the smallest possible expected code word length is the entropy of \(X\). That is,

The expected code word length of \(X\) under some code \(C\) tells us how efficiently one can “compress” the information in \(X\). If on average, \(C\) is able to produce small code words for each symbol drawn from \(X\), then we are able to more efficiently communicate these symbols. Shannon’s Source Coding Theorem tells us that the entropy of \(X\) is, in some sense, the true “information content” of the random variable because there is no \(C\) that will enable you to compress \(X\) past \(X\)’s entropy.

To prove the theorem, we will utilize another result (which we will prove in another blog post): the converse of the Kraft-McMillan Inequality. This theorem goes as follows:

then there exists a \(B\)-ary uniquely decodable code \(C\).

Basically, this says that if you have some set of integers \(\{\ell(x) \mid x \in \mathcal{X}\}\) that satisfiy a certain inequality, then there exists a uniquely decodable \(C\) that will map each source symbol \(x \in \mathcal{X}\) to a code word with length \(\ell(x)\).

The Kraft-McMillan Inequality will enable us to formulate an optimization problem that attempts to minimize the expected code word length under some hypothetical code function \(C\) that produces code words of length \(\ell(x)\). That is, where \(\ell(x) = \vert C(x) \vert\). This optimization problem is as follows:

The constraint in this optimization problem ensures that for any set of code word lengths we consider, according to the Kraft-McMillan inequality there will exist a valid uniquely decodable code!

To show that this is truly equivalent, we will use a quick proof by contradiction. Let’s let \(\ell_1^*, \ell_2^*, \dots, \ell_m^*\) be the values for \(\ell_1, \ell_2, \dots, \ell_m\) that solve the optimization problem. Now, let’s assume, for the sake of contradiction, that this solution is such that the summation in the constraint is strictly less than one:

which breaks our assumption. So under this assumption, each \(\ell_i^*\) is strictly positive.

So far, we’ve made a bunch of changes to this optimization problem to make it ever more straightforward to solve. Can we go further? Let’s do a quick change of variables and let

This then implies that

which leads to a new form of the optimziation problem:

where \(\mathbb{R}+\) is the set of strictly positive real numbers. This optimization problem can now easily be solved using Lagrange Multipliers!

To do so, we form the Lagrangian:

We now compute the partial derivative with respect to each \(q_i\) and set it to 0:

Plugging in this solution to the objective function we arrive at our final lower bound on the expected code word length! It is simply

This is precisely the entropy of \(X\)!