In this series of posts, I present my understanding of some basic concepts in measure theory — the mathematical study of objects with “size”— that have enabled me to gain a deeper understanding into the foundations of probability theory.

In part 1 of this series, I introduced the measure-theoretic definition of a probability space:

Recall, our goal for this series, as outlined in part 1, is to unify the definitions of discrete and continuous random variables. How does this measure theoretic definition for probability achieve this goal?

A random variable is usually first introduced as a variable (like those used in basic algebra: $y = 2x$) whose value is random. For example, the outcome of a die-roll can be modeled as a random variable $X$ whose value is randomly either 1,2,3,4,5, or 6. We then go on to discuss probabilities regarding which value $X$ will be. For example, for a fair six-sided die, $P(X=1) = 1/6$.

This definition, though not all that rigorous, tends to work fine for basic applications. Now let’s look at its measure-theoretic definition:

Wait what? A random variable is really a function? And what on earth is a measurable function?

A measurable function is defined as follows:

An illustration of a measurable function is depicted in part B of the figure below: 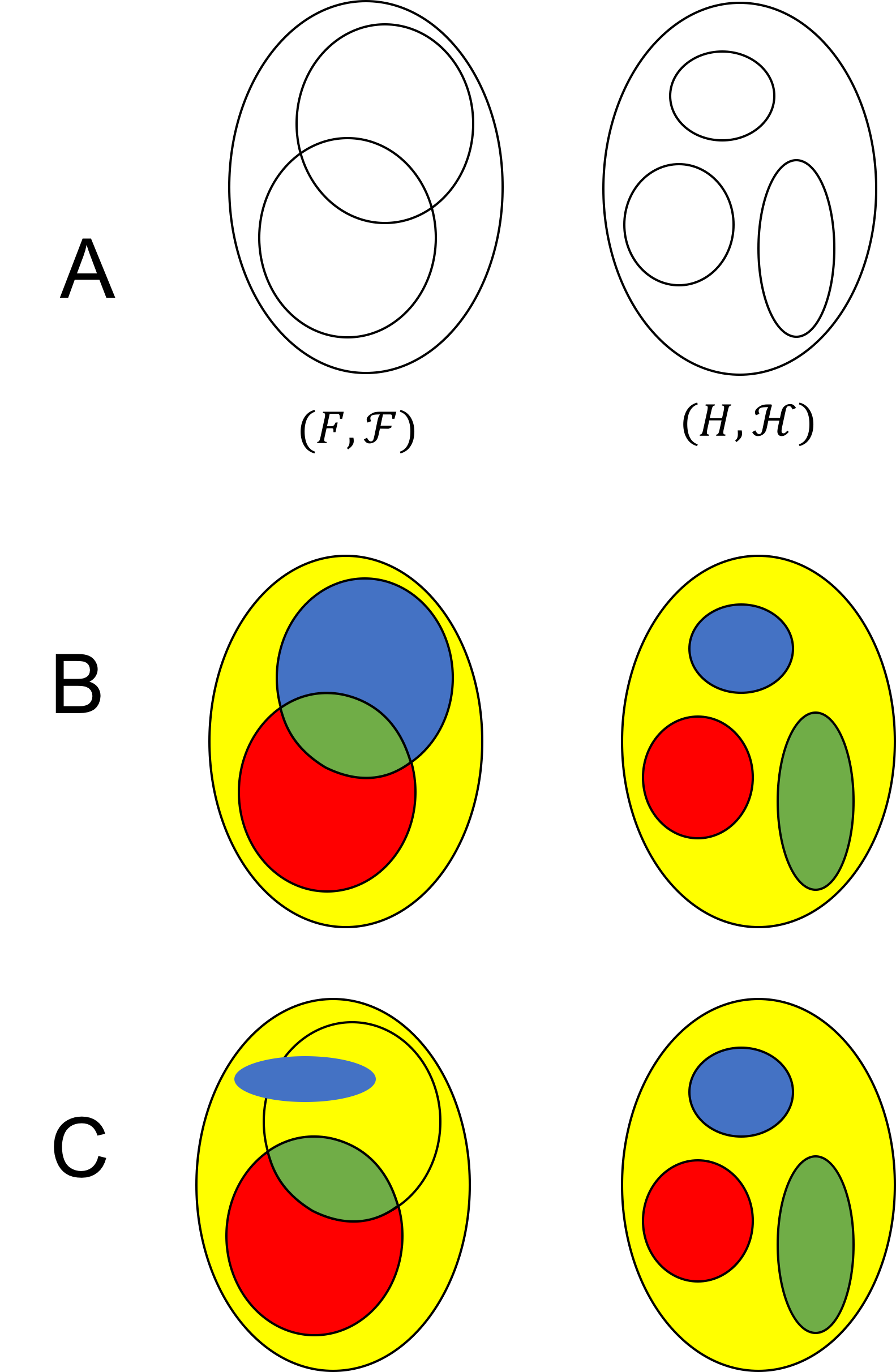 Back to random variables

This is still pretty abstract, so in the following two sections we will see how this definition covers both discrete and continuous random variables.

Take a random variable $X$ that represents the outcome of the toss of a fair-coin. In this case, $\Omega$ represents all conceivable futures – that is, the infinite set of ways that the coin could fly, spin, or bounce before coming to rest.

The random variable, $X$, is a function that maps each conceivable future to a value in some set $H$. In our case, $H$ contains the two possible outcomes of the coin toss:

The sigma-algebra $\mathcal{H}$ over $H$ encodes all of the groups of outcomes of the coin-toss that we wish to assign probability:

Generally, we use the familiar notation

A continuous random variable $X$, maps elements from $\Omega$ to the full set of real number $\mathbb{R}$ That is, $H := \mathbb{R}$. The trick now is figuring how to construct a sigma-algebra $\mathcal{H}$ over $\mathbb{R}$ such that the preimage of any element of $\mathcal{H}$ is an event in $E$. Sadly, we cannot assign non-zero probability to every real-number due to the fact that the real numbers are uncountable – that is, they are infinitely dense – and therefore any attempt to assign each real number’s element in $\mathcal{H}$ a non-zero probability would cause $P\left(X^{-1}(\mathcal{H})\right)$ to blow up to infinity, which contradicts the definition for a probability space!

Now the question becomes, how do we determine the probability measure assigned to the preimage of an interval under $X$?

A random variable $X$ admits a density function $f$, if the probability measure assigned to the preimage of each interval $(a,b)$ under $X$ can be computed with the following integral:

And there you have it, both discrete and continuous random variables can be described by one common definition.

Beyond discrete and continuous random variables

For example, we may wish to discuss a random variable whose values are such things as vectors, matrices, functions, or graphs!