In this series of posts, I will present my understanding of some basic concepts in measure theory — the mathematical study of objects with “size”— that have enabled me to gain a deeper understanding into the foundations of probability theory.

As a computer science undergraduate student, I was taught the basic and incomplete version of probability theory in which discrete outcomes (e.g. a dice roll) are treated quite differently from continuous outcomes (e.g. the temperature outside). For example, the expectation of a discrete random variable $X$ is given by.

whereas if $X$ is continuous its expectation is given by

Not only did I find this division to be unsatisfying, but as I continued to study statistics and machine learning through grad school, I found it to be inadequate for a deeper understanding into the workings of the topics that I was studying.

I learned that this division, between continuous and discrete distributions, is actually a bridge over a deeper and more complete theory of probability, based on measure theory, that not only unifies the discrete and continuous scenarios, but also extends them.

A measure theoretic foundation for probability

I’ll introduce a bunch of terms in my definition for probability and in the following sections, we will define and discuss each of them. First, the formal definition of a probability space:

$\sigma$-algebra? Measure space? Let’s introduce each of these ideas, and then we will come back to this full three-part definition.

Measure theory is all about abstracting the idea of “size”. What do we mean by size? Size is a number that we attribute to an object that obeys a specific, intuitive property: if we break the object apart, the sizes of the pieces should add up to the size of the whole.

There are many phenomena that follow this basic “size”-like idea including such phenomena as mass, length, and volume (and as we will see later, probability). For example, if we have a ball of clay and we split the ball of clay into two, then the masses of the two smaller balls of clay will add up to the mass of the original ball of clay.

Before we can discuss the “sizes” of objects and pieces of objects, we need a mathematical way to describe an object. Measure theory uses a set $F$ to denote the object that we are considering. For example, $F$ may represent a ball of clay.

Given our object/set $F$, we then need a way to describe how $F$ can be broken into pieces. This notion of “breaking an object into pieces” is described by a $\sigma$-algebra over $F$:

Definition 2: Given a set $F$ and a collection of subsets $\mathcal{F}$, the collection $\mathcal{F}$ is called a $\sigma$-algebra if it satisfies the following conditions:

In fact, with these three axioms for the definition of a $\sigma$-algebra, it follows that a $\sigma$-algebra is not just closed under set unions (i.e. Axiom 3), but also set intersections, set differences, and symmetric differences (see the Theorems 1, 2, and 3 in the Appendix at the end of this blog post).

With these properties in mind, another way to imagine this is to think of $F$ as a ceramic plate that is cracked. The $\sigma$-algebra describes all the ways that the plate can fall apart along its “cracks”. The figure below illustrates this: 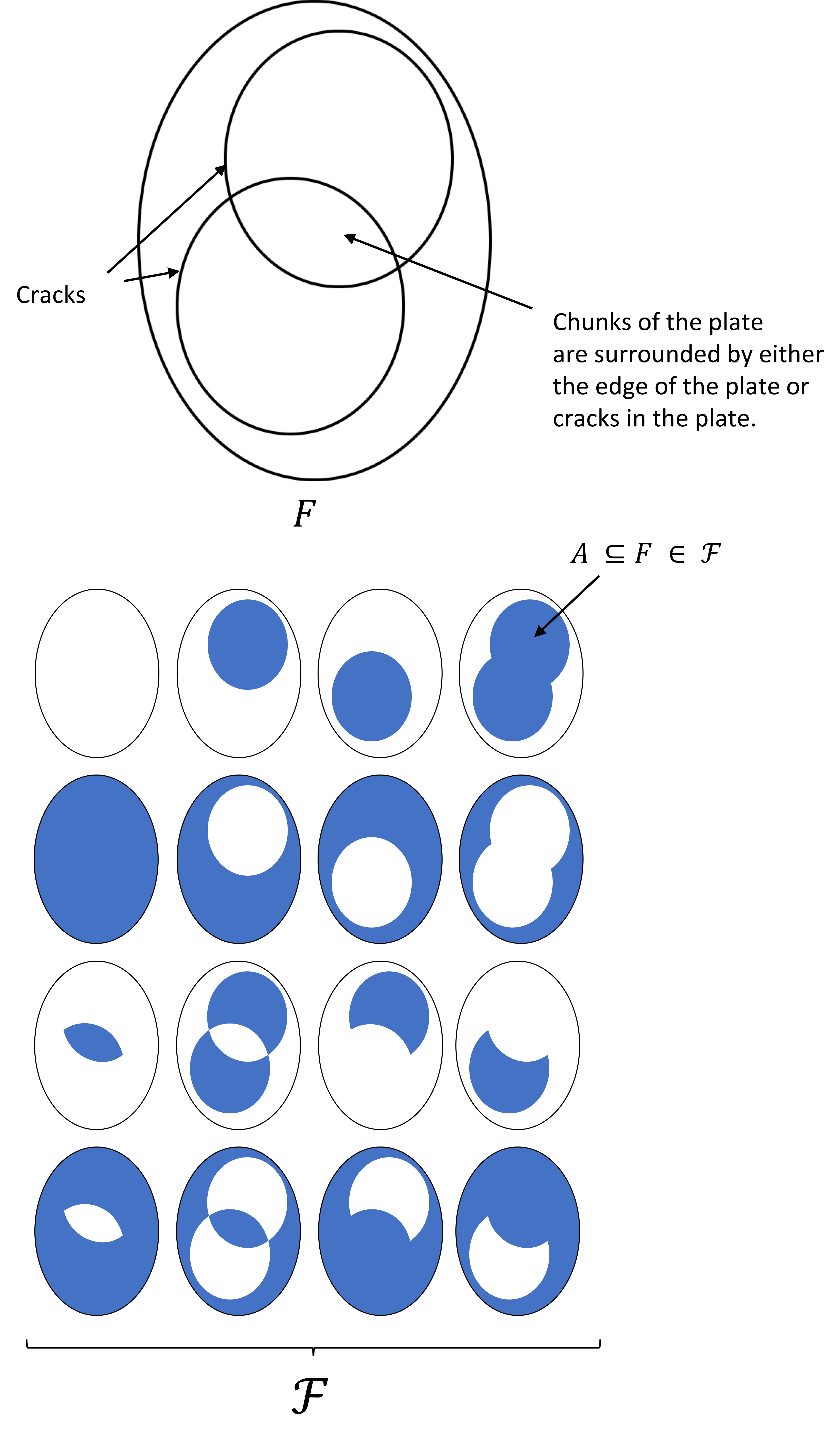 In this figure, the large oval at the top is a ceramic plate with cracks along its surface. Let the points on the plate be the set $F$. Below, we illustrate every subset $A \subseteq \mathcal{F}$. You can think of each $A$ as representing the plate with some combination of the chunks removed. We are only allowed to remove a chunk if it is surrounded by cracks. The entire set of configurations of ways we can remove chunks of the plate is the $\sigma$-algebra $\mathcal{F}$ over $F$.

is a measure if the following properties hold for $\mu$:

The first part of the definition requires that a “size” (i.e. measure) cannot be negative. That’s intuitive. The second part says that the “null piece” (i.e. nothing) has a size of zero. Finally, the third part says that the sum of the sizes of two pieces of an object must equal the size of the two pieces glued together.

A schematic illustration of a measure space is illustrated below: 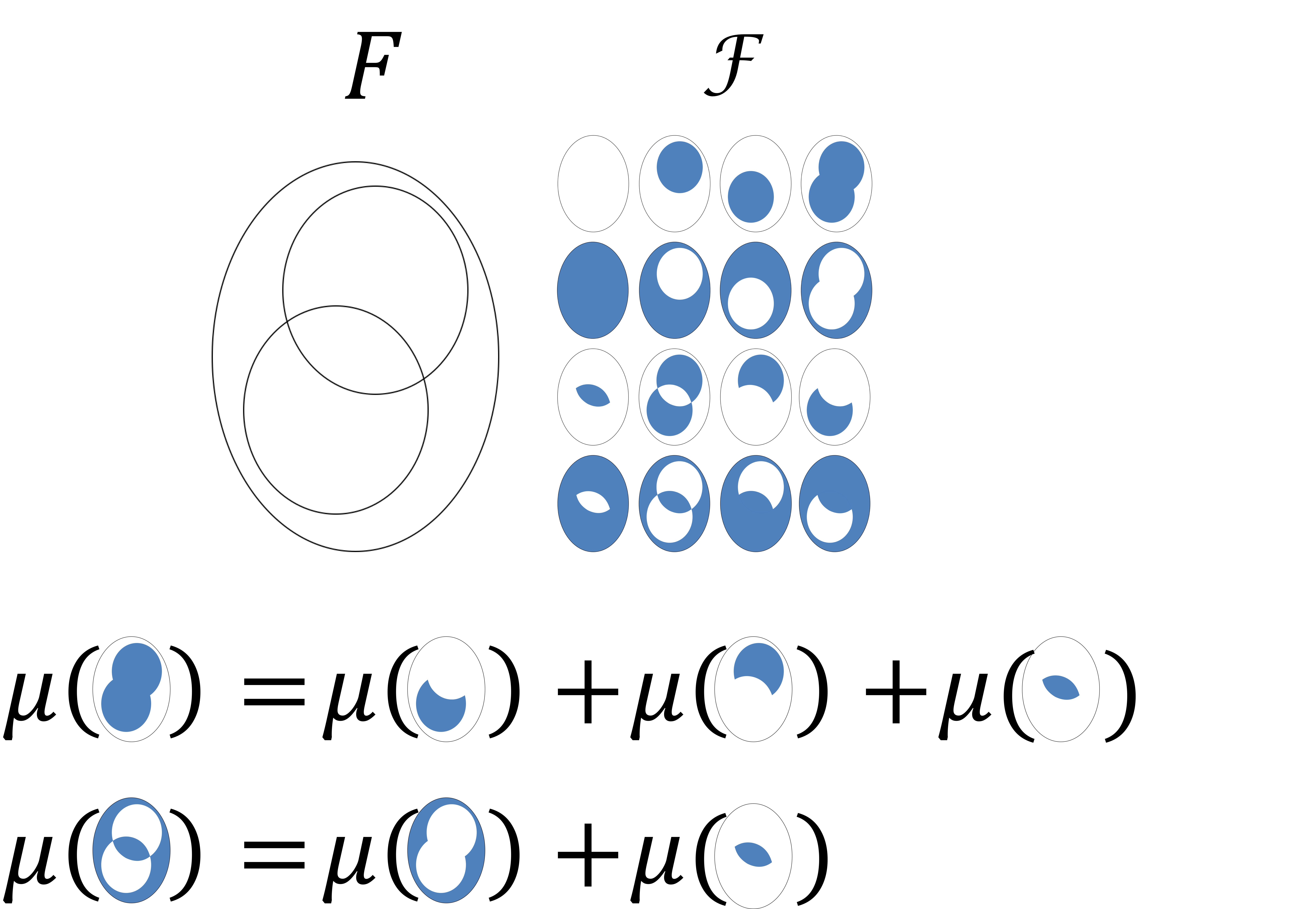 Again, we represent the ceramic plate and the $\sigma$-algebra induced by the chunks formed by crackes along the plate. Below this are two illustrations of Axiom 3, countable additivity, for a measure. Intuitively, the “size” of two independent chunks should be the sum of the sizes of the individual chunks.

Now, a measure space is simply the combination of a set (i.e. object), a $\sigma$-algebra (i.e. pieces of the object), and a measure (i.e. ways to describe the sizes of the pieces):

Now that we have some basic measure theory, let’s go back to the definition of probability. A probability space is simply a measure space where the measure assigned to the entire object is one!

At first this might seem somewhat unintuitive. What is the “object”, what are the “pieces”, and what do we mean by “size”? This is where things get a bit philosophical. I like to think about it as follows:

All of this begs the question, why do we need measure theory for all of this? First we see that measure theory provides a natural description of uncertainty in the following ways:

Second, as we will see in part 2, this foundation for probability theory will enable us to unify both discrete and continuous probability distributions.

Appendix: Theorems for properties of $\sigma$-algebras

In the following theorems, we prove that $\sigma$-algebras are closed under set intersections, differences, and symmetric differences.